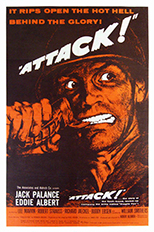 Dramatic artwork reminiscent of the rawest official wartime posters. Aldrich's film was part of a wave of post-war movies that showed much more of the unvarnished truth of combat. Scarce. V. Fine condition. 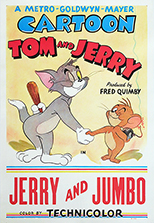 Hitch's successful re-make (with James Stewart as co-production partner) of his own 1934 film of the same name. Hitch: "Let's say that the first version was the work of a talented amateur and the second was made by a professional."

Few songs written for a film became such a standard as Jay Livingstone and Ray Evans' 'Que Sera, Sera', which won the Oscar for Best Music, Original Song.

After the worldwide smash hit of 'Dracula', the film's U.S. distributor Universal agreed remake rights with Hammer for any of Universal's original horror titles. Hammer's run-ins with the British censor - and the impact the films made on U.S. audiences - were heightened by their spectacular Technicolor. 'The Mummy' amalgamated plot lines from three of Universal's Mummy series. 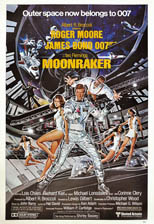 Amongst the best poster art of the Roger Moore Bond era, excelling on this deluxe card stock format, of which few were printed. Excellent condition. 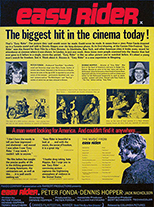 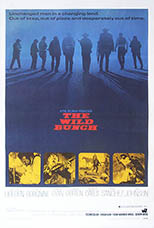 Original American poster for Peckinpah's pivotal western, the culmination of the growing darker tone of the Hollywood western noticable from the 50s on. Casting an elegiac look back to classic tradition and ahead to the murkier morality of the 70's, the film is a masterpiece. Bill Gold photographed the actors in the Warner Brothers parking lot, walking into the sun to create the silhouettes and long shadows. V. Good condition.

De Niro won the Oscar for Best Supporting Actor for his portrayal of a young Vito Corleone (and the young Marlon Brando).
Excellent condition. 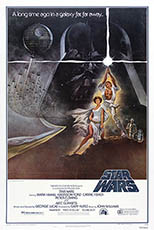 Artist Frank Frazetta was an influence on Lucas for Star Wars and there was hope that Frazetta would do the poster artwork, but Lucas insisted on retaining rights and Frazetta declined. Nonetheless, Jung's artwork is styled with a distinct nod towards Frazetta's work. Beware fakes. Linen backed. Excellent condition.

Jung's earlier credits include the poster art for 'Dr. Zhivago' and the 1966 re-release of 'Gone With the Wind'. Carrie Fisher's mother loved the poster so much she requested a duplicate painting. The original hangs in Skywalker Ranch. Scare poster on unusually heavy stock. Excellent condition. 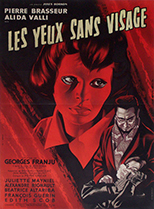 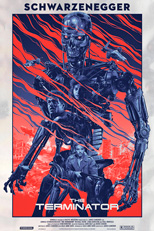 The concept was inspired by a highly significant fever dream a struggling James Cameron experienced in Rome in 1981 of a terrifying chrome skeleton emerging from flames.
Gabz intended the posters to form a diptych. 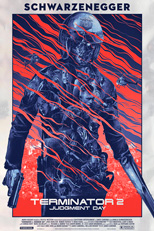 The concept was inspired by a highly significant fever dream a struggling James Cameron experienced in Rome in 1981 of a terrifying chrome skeleton emerging from flames.
Gabz intended the posters to form a diptych.

Original trade ad for the film, featuring Saul Bass's classic 1-sheet poster layout. The spirograph design itself, as seen in the title sequence, was the creation of computer graphics and animation pioneer John Whitney.

Essentially a miniature, stripped of credits, of the rare large 3-sheet poster. Here the figures represent Gavin Elster and 'Madelaine' as the plot is revealed in flashback.